The Act of Silence 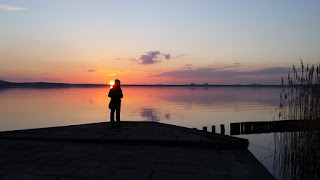 In my life, silence has always played a very important role. You see I grew up in a household ruled by silence. I grew up in a house ruled by Mental Illness. One of the biggest things I remember growing up was that we must always be quiet. As a child you have this instinctive need to run, jump and yell. You are young, you have joy at being alive. Unless it is taken from you that is.
When I was little, I never knew the name for the disorder that ruled our lives, and when I call it a disorder I truly mean disorder. As I understand it now, that is what my Dad’s life felt like to him. Disordered. My Dad suffered from Schizophrenia.
At his worst moments, when his demons were so loud in his mind that he could hear nothing but them. When he struggled not to listen to them and follow what they asked of him. Those times when he hid himself away in the back of closets to keep from harming anyone; especially one of us kids. That is when we had to be quiet. We had to in a way hide ourselves away from his demons as to not awaken their attention to us. It was in these quiet moments that I began to write. To slip into my own world where I could be carefree and alive. Not a solemn shadow of a girl in a corner.
I remember watching my Dad stand in the middle of our bright and cheerful kitchen. It was painted sunshine yellow and had large windows. And he would stand there like a thunderstorm threatening to drive the sunshine away. He would beat on his chest, like if he hit himself hard enough the pain would go away. His eyes shadowed with confusion, as he moved to the wall and started banging his head against it. I think he thought it would quiet the voices, but then he would start banging his head harder and harder. All of sudden our house would no longer be silent; my mom would start yelling at him to stop. And the yelling would scare my younger brothers and they would begin to cry. Chaos would take hold.
Not long after, I would gather my brothers and go across the street to the neighbor’s house, he would then go back to help my Mom calm down my Dad. We would usually return the next day to begin the silence once again. Never knowing when something would trigger the explosions so prevalent in our lives.
All the while my Dad battled his demons, my mother had her own demons because she also suffered from Mental Illness. Yeah, I got lucky with my gene pool. Studies show children born to parents who both have a mental illness are 50%-75% more likely to suffer it themselves. I’m glad I didn’t know that until I started group therapy for my Bipolar disorder. It would have really bugged me.
You may think my childhood sounds like hell, but it wasn’t. On my Dad’s good days; when he had the demons under control. On those days he was the best Dad. He was loving, had a great sense of humor and let his only little girl put makeup on him and put hair rollers and barrettes in his hair. Some of my favorite memories are of him coming to the dinner table and still have my “makeover” present and usually he had a barrette or two still in his hair. He was the Dad that would let the boys crawl all over him like he was a jungle gym. That’s the thing about being mentally ill, you can still live a normal life. You just have to live it within limits.
I didn’t know that either one of my parents battled with their demons or anything about what caused them. Not until I was a teenager and I started asking questions about the past and about things that were surfacing in my mind that apparently I had blocked out. Things too traumatic to handle as a child, but somehow had enough impact to cause a change to my core personality. When my own mental illness reared its ugly head. That is when I began the journey back down the rabbit hole of my memories to the quiet; to the act of silence that was my beginning.
I worried that I would suffer the same disorder, that with one wrong turn his demons would find me. How do you know if it is you or if it is your fears that make you ill. I am sure that this must be a fear many children of mentally ill parents suffer. You wonder if you are projecting their psychosis' onto yourself.
Sometimes I think this is where my Anxiety/Panic disorder was born. The constant fear and anxiety I grew up with. I only know that even today, I battle the crippling fear that one day I will wake up and my demons will have started whispering in my ear, and I won't be able to shut them out. I know I will never live my life quietly. I will scream to be heard above the rest. To shatter the silence.

If you have ever known someone battling mental illness or want to know more, do your research. I found a lot of information at www.mentalhealthamerica.net