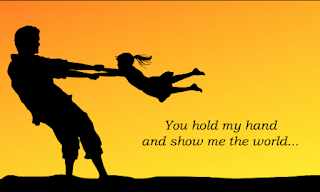 With today being Father’s Day, I feel like sharing some of my favorite memories of my Dad. Sadly, he passed away in May of 1999. There isn’t a day that goes by that I don’t think about him and miss him. To wonder if he would be proud of the woman I am today.

While taking my journey through the dusty roads of my recollections, the first memory I find is one that always pops into my head when I think about him. It is the sound of his laugh. I wish I had a way to replay it for my brothers, just to ask if it’s the same laugh they remember. For a man who never went a day without a struggle, he always could find a reason to smile and laugh.

He had a laugh that was almost a cackle, but it was just a tad too soft to be considered that kind of laugh. He laughed with his whole body. It’s hard to describe but as he began to laugh, his eyes would take on this mischievous twinkle, and then his body relaxed into the moment. I think it was because he carried so much tension at every other moment in his life.

His laugh was also contagious, my Dad never laughed alone. Once he started everyone in the room soon followed. I always thought it funny that my Dad and one of my uncles had almost the same laugh, but where my Dads was felt from the heart. I never got that feeling from my uncle.

My second favorite memory was listening to my Dad sing. He had a voice that could have taken him places, but he suffered crippling stage fright. He loved to sing old school country like Hank Williams Sr., Conway Twitty, Johnny Cash. My Dad was a teenager during the birth of rock-n-roll so he loved Elvis, Jerry Lee Lewis, and Buddy Holly. I think that my Dad was like me and he just loved all music. He was always willing to listen to the new stuff we kids were listening too and give it a chance.

When asked to describe his voice I would say it was a perfect blend of Elvis and Conway melded together. He had that low growl that drew a woman’s ear, and his vocal range was amazing. I never found a piece of music that my Dad couldn’t sing. I remember bringing home the music from my high school choir, that we were rehearsing for our latest performance, and Dad helping me practice.

Some of my most cherished memories are those spent with my dad sitting around the kitchen table singing along to the oldies radio station or my collection of cassette tapes.It used to drive my Mom crazy. To this day, I wish I had pushed record just once to capture the sound of his voice. Not only for myself but for his grandchildren that never got to know him.

Now we come to the memory most little girls grow up dreaming about. The day they get married, and their Dad walks them down the aisle. 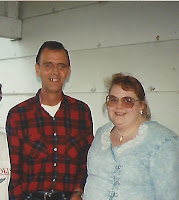 The day of my wedding was a beautiful day. The sun was shining, the temperature was in the high seventies; which during the planning stages was a blessing, seeing how I was married toward the end of October. Living in the Midwest, it could have easily been snowing and bitterly cold. In fact, it had snowed a week earlier.

The wedding was scheduled for four in the afternoon, with the majority of the guest arriving from out of town. This was due to a last minute change of venue. Our new venue was under our carport, you know just in case of bad weather since my fiancee and I wanted an outdoor wedding.

My best friend had stayed the night, and my mother lived only a few blocks away. We were all watching for guests to arrive, not to mention the preacher. To say the least my nerves were on a fine edge. To top it all off we had just moved to our house a couple of days before, so we were dodging around boxes. My eyes kept an eagle eye out for the gun metal gray car my step-mother drove. Most girls want their Moms on their wedding day, I wanted my Dad.

The guest started to trickle in around three, mostly because they weren’t sure where they were going and had left home early. At that time all I had accomplished was getting my hair and makeup done. I was outside greeting guest in a pair of shorts and a tank top. They kept asking me if I was getting married in this outfit. I was quick to say that until the preacher showed up, the wedding might end up just being a great party. I was only half joking.

I had just stepped out on the front porch for what felt like the millionth time that day, when I saw my stepmom's car coming down the road, followed closely by the preacher. Our best man and matron of honor pulled in last. I ran out to the car to get hugs from my stepmom and Dad. The preacher and his wife joined us and gave my attire a strange look. I laughed and told them I was on my way to dress, and we could start soon.

What should have been a quick process of getting my dress on ended up an ordeal? When I started to get dressed in the bedroom only to find out that our door wouldn’t shut all the way, seeing as how the guest was milling around right outside it, I had to grab everything and head for the bathroom. Our four pm wedding was now a five in the afternoon wedding. At a quarter to five, my Dad met me on the front porch to escort me down the aisle. 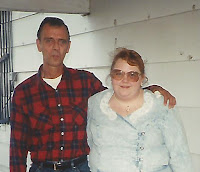 He looked me over in my powder-blue denim dress with the antique ivory lace accents and told me I was beautiful, and that he was proud of me. He then laughed his beloved laugh with a twinkle in his eye. He said, “this is it. You have two choices, one- I can have the car running on a seconds notice, and the highway is that way.” Here he pointed towards the highway. “Or two- I can lead you around the corner to marry your fella. Whichever way you choose, I’m behind you one hundred percent.” He stood waiting as I actually debated the options. I told him that I needed to make an honest man of my fella, so as I linked my arm through his, we headed for the carport and my future.

That is why I loved my Dad so much. He always gave me options and offered me advice. In the end, though it was my own decision, be it right or wrong. Also, he was there no matter what the outcome of those decisions may be. It has been hard through the years to make my decisions without my Dad’s special brand of wisdom. I think that is why he is on my mind so much lately. As I’m entering this next chapter of my life, I wish he was here to give me options and help me decide the right course to follow.

To all of my readers, who are Dads. I want to wish you the Happiest Father’s Day! This also goes for all of those Mom’s out there who pull double duty and do both jobs. Just remember to live life fully and laugh often.