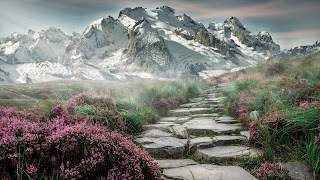 Happy Monday everyone. I am slowly getting back on schedule with my blogging. This week has been hard because my health issues have caused me some extreme pain. I was supposed to see a new doctor last Monday and I get there only to be told that they don’t take my secondary insurance which covers my co-payments. I then had to call my primary physicians office to find out why they referred me to a doctor that doesn’t accept both and I find out that they no longer have my secondary insurance information in their files. Oh, the joy of dealing with doctors when all you are seeking is the help to alleviate the pain and find out what is wrong.

On top of that my muses were still a no-show as far as moving my book along. I think the pain aided in their staying away. When all you can think about is hoping that parts of your body won’t go into muscle spasms and freeze in a contortion of what they should look like, it is kind of hard to think about writing the integral final chapters of your book.I spent the week instead refurbishing an old dresser that should have taken one day, two at the most to finish. Because of the heat, we are experiencing down here in Hell; oops I meant Texas. I had to work in short spells to keep from overheating. Add in the stupid muscle spasms and it made for some fun trying to hold a paint brush.

I’ve enclosed pictures of the before and after of said project. It wasn’t until I was taking the picture
for the after picture that I realized I missed a panel in the painting process. How did I remedy the situation? I stuffed a basket in the space thus trying to hide the white glaring out at me. As you can see it didn’t do a great job but will suffice until I can find the energy to paint it.

As anyone who has done a renovation on an old piece of furniture, it gives you time to think about stuff. I thought about how a few short years ago, I would have whipped this out and have started a new project within a day or so. Now it took me a whole week. As I thought along those lines I began making a list of stuff that I could do with ease before my health decided to go all wonky. Sure I expected at the ripe “old” age of fifty to have to slow down a bit. I have battled arthritis most of my life. As I aged it spread from just my ankles and knees, up into my back, and eventually to my arms.

Now I have to add painful spasms that go bone deep, leaving me in a pain that is hard to describe. I hate when the doctor asks me if the pain is a burning, throbbing, or sharp pain. I always catch myself saying yes. This is when the doctor asks “well, which is it?”  I sit there in my paper gown looking at him in confusion. “What do you mean which one? I just said yes to all of the above.” Stupid doctor, it makes me want to poke him in the eye and stomp on his foot. Then I get to ask him what kind of pain he is feeling.

Funny how I didn’t think this post would be about my aches and pains. I started with the idea of talking about my muses gone wild and how I pushed through and got some writing done anyway. Yeah, I know it didn’t happen so why talk about it.

Just now my niece asked to use my phone to take a picture of Gizmo, and as she was scrolling through the contacts to send the picture to herself, I noticed how many doctors I had in my contacts. You know you are getting old when the numbers of doctors on your phone are higher than the number of your friends and family. Out of one hundred ten contacts, more than twenty are doctors or hospitals. True, some are my mom’s doctors but for the most part, they are my current or previous doctors. Which leaves me sitting here wondering when it happened. When did I get old? I want to say I’m not old but when you see a cute guy and instead of thinking “Wow, what a hottie”, you instead are thinking how young he looks. Then you have to consider the fact that age has crept up on you.

I wonder if this is how my Mom and Dad felt when they got older. The scariest thought is that I am only seven years younger than the age my Dad was when he passed away. Now if that doesn't make you think some macabre thoughts, nothing will. But I digress. I have come to an uneasy acceptance of my age and its drawbacks. I know I am going to keep getting up every morning and trying to do what I dream about. The dream of becoming a published writer. No amount of pain or a number are going to slow me down in the completion of that goal. So I guess I can count that as a win.

Well, I think my rambling has come to an end and don’t remind me how old people have a tendency to ramble on. I might whack you with my cane. Until next week remember to love fully and laugh often.