Have you ever felt that you had no voice, or that you wanted to scream but couldn’t? I feel this a lot but it isn’t because I didn’t have a say in my life or even that I was so frustrated a good scream felt like the right action to take. It is because more times than I like, I literally have no voice. You may be asking why? It is because serious virus’ left untreated can turn into the internal damage that you never know is happening.

Back in 2006, I contracted a very serious bacterial infection. I spent a whole month battling constant vomiting, high fevers, diarrhea, and gruesome muscle spasms tied into body aches. My average temperature was 100-102.9 degrees. Any medical person can tell you at temperatures this high, you are prone to hallucinations and a host of other goodies. The worst being dehydration. By the time I was so miserable I just sat down in the middle of the gardening department where I worked and bawled like a baby was my breaking point. Yes, I worked the whole time sick as a dog because I had no insurance and couldn’t afford to go to the doctor.

That was the day my best friend and my boss demanded I go to the hospital. I cried all the way home. Yep, you got it I went home instead of the hospital which was right on my way. Later that night I did go when my brother came home from work and found me once more delirious, babbling on about work and how I hated to let so many people down. I never thought of how he was feeling watching me through all of this. He knew not to say go to the hospital, he knew how pig-headed I could be. I did, after all, take after my Dad who worked through bouts of pneumonia, two hernias, and severe asthma. We grew up watching that man go to work sick as a horse out into negative number temperatures just to keep a roof over our head. My dad was a garbage man back before curbside service.

So who was I to give in and let sickness beat me? What I didn’t realize was that those high fevers and the stress on my throat from vomiting so much was leaving me wide open to bacteria continuously re-entering my system. On that final day when I gave up and went to the hospital, I had been running a 102-103 temperature for two days straight. I was weak as a kitten from lack of nourishment and dehydration. My blood pressure was the lowest it had ever been in my life. The triage nurse at the ER took one look at me and rushed me through triage and into a room. I was hooked up to an IV drip of life-giving fluid in a hurry. Well as fast as they could find a vein in my dried out veins that on a good day makes me a hard stick.

I actually felt the fluid entering my body because I was so dehydrated my body went into a sort of shock. I wouldn’t have been alive much pass a few days if I hadn’t gone to the doctor, at least that was what he told me while lecturing me for not coming in sooner. He said I would have been dead from lack of fluids and nourishment. Every time I tried to eat it came back up. I am glad that I listened to my bestie and my super tolerant boss. They gave me the push I needed to go to the hospital. I don’t think I ever told them how grateful I was for them.

So fast forward to my first year in Texas. That would have been 2012. Anyone who has ever lived in Texas knows what Cedar Fever is. Now I had just moved from the state of Washington, the Evergreen state. I am very allergic to evergreen. Never read the literature about Washington when I planned on moving there, so imagine my surprise moving into a state filled with the stuff. Well, Cedar Fever is much like what I experienced when moving to Tacoma. I immediately started sneezing and got sick as a dog. When I finally went to the doctor I was diagnosed with a sinus infection and told to go to see an allergist. A newly updated allergy prescription and I was good as new. 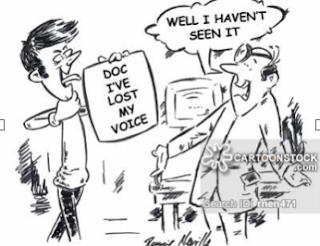 Or so I thought the next year when the cedar pollen started drifting through the air I suffered far worse. I was using an inhaler just to get a few breaths in. I once again came down with a sinus infection but this one made my face swell up that I could barely open my eyes. It caused swelling all the way down my throat. I was fighting for every breath I took. What I didn’t know was that this was just as severe a virus as the one that almost killed me in Washington.The doctor told me to go to the ER if my top eyelids starting swelling because it could cause severe damage. I went to the ER the morning I woke up and could barely see. They did a CT-scan on my face and found the infection was very severe. They started me on a course of a couple different medications and gave me a referral to an Eye, Nose and Throat doctor.  I went home took my medicine and went back to bed.

I woke up the next morning with my eyes swollen to the point one was completely closed and the other was just a squint. I called my primary care and they took me right in. The infection had spread to my lymph nodes and my larynx. She added another medicine to fight the infection more and pain medication because by now my face felt like a severe bruise. I asked my sister in law if she knew who punched me it felt so bad.

The added medication began to do it’s magic and the swelling began to abate. I could see how of both eyes again. I could take a deep breath without choking. I was recovering. Or was I? As I said at the beginning my voice is not taken for granted anymore. With those two infections,  my larynx was damaged. I went to my doctor for my follow-up and told her I was having trouble with my voice.I kept losing in within moments of speaking to someone. I couldn’t afford to not have my voice. I was the one who did all the talking for my Mom at her doctor's appointments, I took care of all her personal business as well. I couldn’t talk on the phone because within a few sentences the person on the other end couldn’t hear me. Anyone who has lost their voice knows the frustration of not being able to make yourself heard.

She reconfirmed my referral to the E.N.T doctor to have me take a look. What he found was my larynx was scarred. He asked if I had ever had a serious infection and when I told him not one but two. He told me that the damaged began with the first and the second acerbated it. He started me on new sinus medication and ordered allergy testing. What a fun day that was when I found out all my allergies. I am allergic to both cats and dogs, sorry I won’t give up my cats for no stupid allergy. I also had some serious allergies to trees, grasses, all that fun stuff. I began allergy shots immediately. If you ever think about being tested I recommend getting the shots, they have made it so much easier to breathe. He also referred me to a speech therapist. I needed to retrain my larynx. 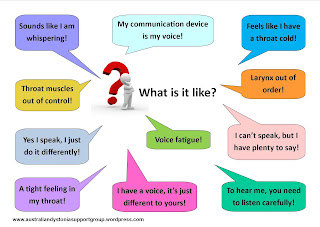 The first thing the doctor asked me to do was sing “happy birthday”. I gave her a quizzical look but did as she asked. The second thing she asked was if it was easier for me to sing than talk. I shook my head yes. She said that’s what she thought I would say. We went into a room where she tested my vocal range. She asked me to both speak and sing to her. My singing voice was a strong as ever if not better. I could hit notes now that I had fought for when I had been in the chorus. She then led me back to her office and showed me a graph of my voice. It is amazing to see your voice on paper. She said the part of my larynx that I spoke with needed to be retrained. It had some scarring but I should be able to speak a complete paragraph and not lose my voice. We then went through some breathing exercises to help me. She also gave me vocal exercises. I went home hopeful for the future of my voice.

The first time I did my exercises at home, I freaked out my sister-in-law. She came to my bedroom door asking if I knew what that sound was. I explained to her and went back to working my vocals. When I went back to the speech doctor she said my voice was showing improvements and added more exercises. Your voice uses muscles just like the rest of your body utilizes muscles. You use different muscle singing than you do speaking. My singing muscles were strong because I got in the habit of doing singing exercises while in school. Now I had to strengthen the muscles used to talk. At least one part of my body was getting a workout. Each session found my voice stronger. Granted because of the scarring it will never be one hundred percent, but I am thankful for what I have.

So I found my voice and I learned how to make it stronger so it could be heard. Finding your voice in life is much like what I went through. You have to exercise those muscles and strengthen them over time. You fight to be heard. Don’t be lazy and think no one wants to listen, don’t think like that. Think I will shout to the rooftops what I want to be heard. Let the world know who you are. Yes, my voice does a disappearing game when I am stressed or upset. Tight muscles don’t move easily. I just keep on trying to make my voice heard though. I would love to hear your voice. Leave me a comment and let me know how you use your voice to be heard. I hope each day that you love fully and laugh often. Keep letting your voice be heard.